Posted on September 14, 2013 by Sharon Autenrieth 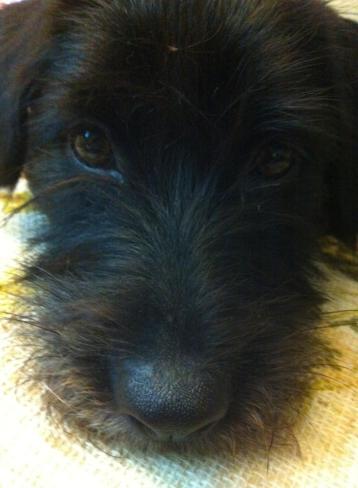 How could you not love that face?

Firstly, dog!  My dog!  My first dog since I was a child!  Her name is Gilly (yes, after that Gilly) and she’s a shelter puppy who is adorable and sort of house trained, and mostly very good except when she eats our pencils, erasers, books, stuffed animals and socks.  Other than that, no complaints at all.  She is always happy to see me, and I love that about her.

In honor of Gilly I’m sharing a dog video instead of a cat video.  It speaks to the secret dreams we all have to express ourselves, I think.

But also, do you know Derek Webb?  If you don’t,  maybe start by researching Caedmon’s Call, one of the finest “Christian” bands of the ’90s (and beyond).  They did not make music that you regret liking, when you look back on the ’90s.  That’s really saying something for a band that was part of the Christian music industry.  Anywho, Derek Webb was a singer, songwriter and guitarist for the band before striking out on his own.  And it has been striking, his solo career.  Risky, painful, beautiful…Derek Webb sings the tormented love affair that a lot of us have had with our faith, and with the church.  His recent single I Was Wrong, I’m Sorry and I Love You is exquisite.

But friends, I come to you today to share something I just learned about Derek Webb.  He is a fan of the Roots (and who isn’t?), but aroused the ire of Questlove when he tweeted about Questlove’s prolific Twitter habits.  Derek straight got himself Twitter blocked by Q, and the public drama that ensued gave birth to this song.  And it doesn’t matter if  you’re a fan of Derek Webb, or the Roots, or simply of tacos and rainbows – you’ve gotta see this video.

That is all.  I feel my work of the day is finished.

(By the way, Rachel Held Evans hosted a Q & A interview with Derek Webb on her site just a few days ago, and it’s a good read!)