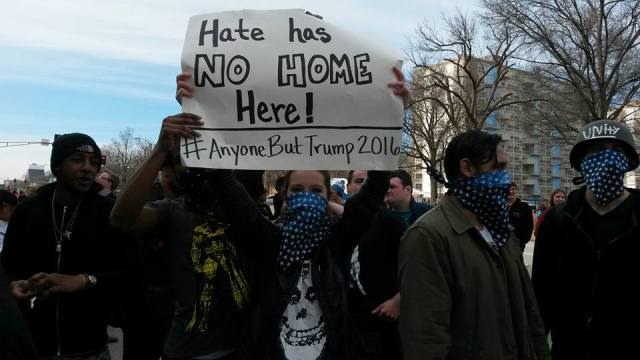 I never blog anymore: I just rant on Facebook. But today I’m going to use this platform to share a few links about our newly anointed Republican nominee for president, in an attempt to consolidate my ranting. Then, of course, I’ll share this on Facebook.

For the last year I’ve been fretting about how terrible candidate Trump is for the country. Note, not just how terrible he will be as president, but how terrible, horrible, no good, very bad his candidacy has already been. Emboldened by “tells it like it is” Trump, all of the worst people – racists and xenophobes, sexists and homophobes, bigots and violent scary zealots of every kind – have come crawling out of their squalid basements, showing their twisted faces to the world as they rave about taking America back from “them”.

Mind you, I’m not describing all Trump supporters, just certain ones. Ones that urinate on a homeless man, or beat peaceful protesters, or fantasize about naming White Supremacist communities after Trump. You know the type.

We’ll be seeing more of those Trump supporters if Donald J. is elected. I predict the Brexit phenomenon will be in full effect, with minorities paying the price. To the victor goes the spoils, and if Trump is victorious it may spoil everything.

Okay, not everything. I’m exaggerating, perhaps – but by how much? Do we really want to find out? It would appear that some of you do. You’ve decided that Trump is God’s man for the hour, even though you are not a racist – don’t be silly! – and anyway, he’s better than Clinton, amirite?

I don’t want to see what America becomes under this “America First” candidate, but I’m only one voter and all of my rants seem to have changed zero minds. In fact, I’ve watched with dismay as many of my “Trump is gross” conservative friends have, one by one, climbed aboard the Trump train. I will never get on that train. In fact, I’d suggest you stop talking to me about the Trump train. It evokes all the wrong images, and reminds me of someone who, reportedly, made the trains run on time.

Anyway. Here’s a recent collection of things that you might want to read about Trump. Strike that:  these are things I want you to read about Trump. I do have an agenda! These pieces seem to me to offer solid evidence for why this man should not be the President of the United States. Your opinions may vary, but if we elect him I want the record to show that I tried, dear God, I tried. I did everything I knew to do to keep it from happening. You don’t need rumors or conspiracy theories with Trump: you only need to track with what he’s saying and doing. We’ll never be able to say he didn’t warn us.

This  will keep you busy for a while.  “But what about Hillary?” someone will say.  “What about the terrible stories that you could have shared about her?”  Yes, well.  Feel free to create that list, and if you are a person who communicates respectfully with me, I’ll read the articles you list.  I’m just asking you to read these materials thoughtfully, critically, and ask yourself again whether Donald Trump is really the person you want leading our country.