In the Trump Bubble 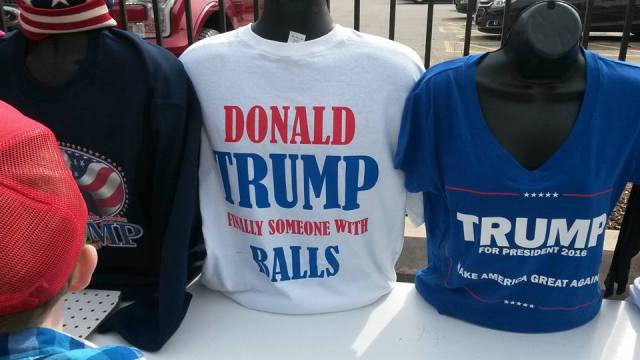 “You’re going to do what? Are you crazy?”
“Please, Mom, don’t go!  You’ll do something stupid and get hurt!”
“Let me know if you need to be bailed out of jail.”

I went because I want to understand. I went because this freight train is bearing down on all of us, and it’s not losing speed, and it terrifies me. That part is both ironic and embarrassing, since one of the dominant themes of my pontificating is that the people of God should never be driven by fear.

So I decided to go the Trump rally in St. Louis and talk to some of them. It was an exercise in empathy – trying to listen and learn from people who….okay, I’m not proud of it, but my view of Trump supporters has been pretty dim. Kathryn Schultz delivered a TED talk in which she said that when we believe people are wrong we assume that there must be one of three explanations: the one who is wrong is either ignorant, stupid or evil. Maybe I was thinking of Trump supporters in those categories. Are they ignorant? If so, how can we disabuse them of this ignorance? Are they stupid? If so, how has Trump managed to rally so many stupid people to his cause? Are they evil? If so, that’s the most terrifying possibility of all, right?

But for one day, I decided to mostly shut my mouth, open my mind, and listen with respect. Perhaps this would help to quiet some of my fears and re-humanize people who have become a scary monolith to me.

I also hoped that hearing Trump in person might unravel the mystery of his appeal. Perhaps he has some power as a speaker that just isn’t coming through my television screen?

I think I succeeded in my first goal, but as for unraveling the mystery of Trump’s appeal? Nope. He’s a terrible speaker. Really, objectively speaking, terrible. But I’m getting ahead of myself.

I stood in line for almost three hours and was inside the rally for another three, so I had plenty of time to chat with the folks around me. My first observation is that the people I encountered – granted, a tiny fraction of a crowd of thousands – were brighter than I expected.

(If at this moment you are offended that I didn’t expect Trump fans to be bright, that’s cool. I get it. I’m trying to be honest about my assumptions going in, and my assumptions do not make me look good.)

I met a teacher, a retired social worker, two counselors who work at a maximum security prison, an estimator for a restoration company, several college students, and the Young Conservatives chapter from an excellent nearby high school. These were professionals, educated people.

There went my buried assumption that these people were all stupid.

With each encounter I began in the same way. I identified myself as a blogger and asked if they’d be willing to talk about their views. And then, “Are you a Trump supporter?” Only once did that question not get an affirmative answer, by the way. The young man sitting in front of me at the rally smiled sheepishly, shook his head and said quietly, “Bernie.” Then we bonded. Every other person was willing to be placed on Team Trump, so my next question was, “What do you like about him?”

I heard the same answers over and over: “He’s an outsider.” “He says what he means.” “He believes what he says.” “He’s not an establishment politician.” Even my Bernie-loving friend said, “There’s no one in this room who can deny that Trump means what he says.”

The longer I spoke with people the more I thought that part of Trump’s appeal is rooted in a deep distrust and cynicism toward the political system. When I was young the Conservatives were the true believers in “The System”, the ones who saw protest and rebellion as not only wrong, but unnecessary because “We have the greatest form of government in the world”. Our elder Conservatives encouraged us to trust in that system and the people in power. But Trump supporters aren’t buying it. They are as sick of and angry at the system as any rock throwing protester could ever be. Over and over (mostly from the older Trump supporters) I heard that there’s no difference between the parties – that they’re all in the pocket for the same corporations and globalist movements. “You can’t trust anyone who relies on the GOP for financing. Trump talks like a man who is not pandering to the Party.” 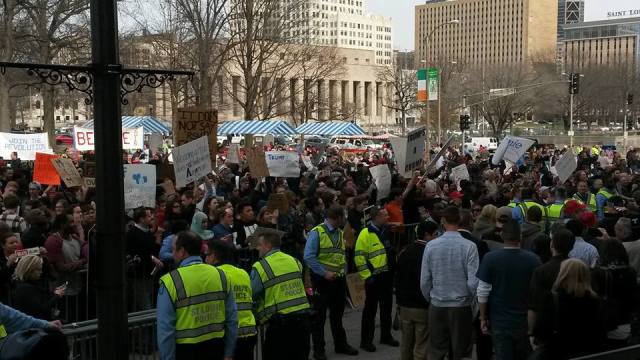 When I asked what issues mattered most, again there were common answers. The national debt. Trade policy. Rising healthcare costs. “Bringing jobs back to America.”
“So, it’s the economy?” I asked Joe, who had already attended four Trump rallies in three states. “Yes, I’d say it is.” Even the Young Conservatives gave the economy as Trump’s biggest selling point. “I want to be an entrepreneur, and I don’t want the national debt dragging us down,” one of them said. “I really believe Trump can balance the budget.”

A couple of people mentioned immigration policy, and one college student mentioned ISIS. But I wasn’t really hearing racism or Islamophobia in their answers to my questions. Nor did any of them seem like the sort of people who would punch a protester in the face. So I started poking the hornet’s nest just a bit, asking about Trump’s attacks on the press (“He’s just reacting to media bias” one of the high school boys told me. “A 1996 study showed that 91% of all journalists were liberal voters.” “That was twenty years ago,” another boy said, at which point he was identified by his friends as the “liberal” in the group.) And over and over I asked this question: “There’s a large Muslim population in St. Louis. Many of them have been here for decades, some all of their lives, working in our hospitals, our universities, established in the community. Do they have anything to fear from the kind of climate that Trump’s campaign is creating?”

Here is where the troubling stuff came out. Joe, a kindly guy who choked up talking about a friend who recently received him American citizenship, shared his conviction that Muslims can never be trusted. “If an uprising happens, Muslims will always side with Muslims.” I asked him if Trump’s suggestion to register all Muslims in America seemed like a good idea to him. “Well, we have to start somewhere,” Joe said.

“The Koran and Sharia Law are not compatible with the American Constitution and our way of life,” the retired social worker said. “They want to force us to convert, and that’s wrong isn’t it? Muslims have a problem. If Christians were doing what Muslims are doing right now, we would have a problem. They’re beheading people, putting people in cages and setting them on fire-” At this point, the Bernie fan asked her if it was fair to judge all Muslims by the actions of extremists. I added, “You know, most of the victims of ISIS are Muslims.” “Right,” she said. “It’s like Chicago. It’s like black on black crime.”

And on it went. The subject of immigration in general seemed to bring up ugly ideas. Even refugees were talked about as just tools of the “global movement” (“They’re forcing them into these little towns to take the jobs.”) Lurid details of murders by immigrants were shared both from the stage and by those sitting near me.

As for those nice young high school boys? As the line into the rally approached the barricaded protest area, one of the boys said, “Oh, look, they’ve got them behind fences. I didn’t know we were going to the zoo today.” That was the one time during the day that I lost my cool. I turned around and said, “That’s the kind of thing you shouldn’t say if you don’t want people to think you’re a bigot.”

So are these Trump followers evil? No. And yes, in that all of us are capable of carrying around evil ideas. Joe, with his Trump hat, Trump shirt, and phone full of photos from previous Trump rallies, should have scared me. But he was such a nice guy, even after I told him that I’m not a Trump supporter. We shook hands after our time in line, and I felt I’d made a new friend. But he’s a friend who would compromise religious freedom and sees all American Muslims as a threat. What do I do with that, except remember that evil isn’t usually perpetrated by monsters? It’s us – ordinary people – who make the triumph of evil possible. It really is banal, and someone may be kind, polite, generous, compassionate….and capable of thinking, saying, and doing terrible things. That could be me. That could be you.

And if I wasn’t aware of this dangerous admixture in Trump supporters (and humanity in general), Trump’s speech would have convinced me. You’ve probably heard about the protests in St. Louis. They rolled out in well-timed interruptions so that Trump’s speech (which was ridiculous and rambling anyway) was consumed by his reactions to the protesters. It became, in other words, a long discourse on Trump’s contempt for the protesters and his longing for more violence. I encourage you to watch this video montage from Rachel Maddow which includes most of what Trump said to and about the protesters yesterday. And every time – every time that Trump shouted “Get ’em out!” or heaped verbal abuse on them, or pined for the good old days when you could rough up a protester with impunity – the crowd went wild. All of those polite, respectable, Conservative Americans were hungry for just this. And that scares me.

The Bernie fan is also an Evangelical Christian, and he turned to me and said, “This is like a Roman Colosseum…..He (Trump) is definitely not a man of God.”

I nodded, and tried to smile, but I think we were both feeling a little sick by that point.

When we left the rally we were met by a sea of protesters. I waded down into that crowd to take pictures and wish them well. I hope that they resist the hatred and blood lust that Trump is selling, because it can suck you in even as you fight it. While waiting to get into the rally I had talked to an 8th grade girl named Melanie who said she had been harassed both online and at school because she likes Donald Trump. “They’ve called me all kinds of names that I can’t repeat to you,” she said. I told her that I have a daughter in 8th grade, too. I told her that I was sorry that she’s been bullied for her political views. “That sucks,” I said. And I meant it. We ought to be able to stand against the ugliness around us without being consumed by it. I don’t want to hate Joe. I don’t want to see anyone hurt. I want us to recognize that the capacity for evil is in all of us, and Trump is exploiting that capacity for his own ends. I saw a protest sign that said, “Hate has no home here”. I suspect the young woman holding that sign was referring to St. Louis, but the days ahead are going to require a renewed commitment from all of us – left and right, whoever we’re voting for, to stamp that sign on our own hearts and minds. Hate has no home here.

2 Responses to In the Trump Bubble