Her name is Supriya.

We chose the name before we knew her.  I found it on a list of Indian names, with the meaning “deeply loved”, and I thought, “What could be more perfect than that?

We were a quiet little family of three:  Mr. Right, our young son, and myself.  After years of trying to get pregnant again we decided it was time to focus on adoption instead.  This was no “Plan B”, since it had always been our intention to adopt eventually.  We just had to rethink “eventually”.

She came first as a name and photographs, medical reports and developmental updates.  She was more an idea than  a person, until she came off the plane in the arms of her escort.  Impossibly tiny for three years old; so beautiful; so overwhelmed by the crowd of people cheering and weeping and fussing over her. 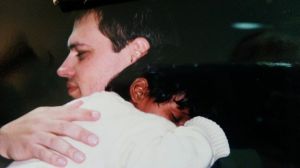 She cried and cried as I held her for the first time.  And then in a moment that was simultaneously breathtaking and heartbreaking (for me, at least), Supriya reached for her new daddy, snuggled into his arms and went to sleep.

She spoke Marathi fluently, but only for a short time.  Within a week or two she went quiet, listening.  And then, just a month or so later, she started speaking English as if she’d always known it.  Just six months after her arrival in the U.S. I took Supriya to a preschool speech screening.  “She’s got a few sounds that are a challenge to her,” the speech therapist told me.  “She could probably benefit from speech class.”  I replied,  “That’s fine.  I think she’s doing really well considering that she’s only been speaking English since November.”  I remember the speech therapist stammering in surprise:  she had no idea.

I was a timid child, and one who gave up easily on difficult tasks.  Supriya was the exact opposite.  It took me a long time to  learn not to say, “You’re too young,” or “That’s too hard for you.”  Over and over Supriya proved me wrong.  The tiny girl flying across the monkey bars, tying her shoes, riding her bike, blowing bubbles with her gum.  She might try and fail fifty times before succeeding, but it didn’t stop her.  She was irrepressible.  Unsinkable.

Supriya was outgoing, joyful, and gorgeous.  We couldn’t go anywhere without her drawing attention.  Sometimes this worried me, as she never knew a stranger.  During our first Cornerstone with Supriya she wandered off twice.  Once, we found her hand in hand with a woman we didn’t know, trying to locate us.  The other time we found Supriya happily munching on cookies in the lost child trailer.  We feared for her, but she never feared for herself.

In first grade she started soccer.  Because we are in soccer country,  many of the girls on her team had already been playing for a year or two.  Supriya’s coach was reluctant to let her play much, since she was a beginner.  Finally I approached him.  “She just wants a chance,” I said.  “She’s a quick learner, but how will she learn if you don’t let her play?”  He took her off the bench far more often after that conversation and soon Supriya had found her one true love – soccer.  When I asked her to choose a pseudonym for this blog, just for fun, it was inevitable that it would be soccer related:  Striker.  We typically called her Supy by that point (pronounced Soupy), and at soccer games this was often transformed into “SUUUUUUUUUP!” when she scored.  She was one of the smallest players on every team, but she was fast and she was resilient.  Those early years of little girl’s soccer were full of timeouts as crying girls were carried off the field after collisions.  It never happened with Supy.  Over and over we watched her get knocked down and bounce up again; take ferocious hits and shake them off.   We thought she was invincible on the field until, suddenly, she wasn’t.

It was the fall of  her sophomore year of high school and she was playing on a select team.  During a tournament game in Kansas City Supriya’s legs were swept out from under her and she came down head first onto the turf.  She briefly lost consciousness, but no one really knew how seriously she’d been hurt.  Diagnosed with a concussion the next day, Supy dutifully sat out of soccer until the doctor told her she could return a few weeks later.  The return was too quick, I think.  None of us were taking it seriously enough.  Supriya loved soccer so much that keeping her away from it seemed unthinkable.  We ignored the fact that the headaches never quite went away.  She felt ready to play, and we let her, after insisting that she wear head gear.

That spring Supy realized her dream of playing varsity.  At the end of the season, in a play off game, she got involved in a scramble near the other team’s goal.  Someone’s arm swept up and knocked her head gear off; someone else hit her and knocked her to the ground – too close to the ball.  Aiming at the ball, the goalie kicked Supy in the head.

She called me from the bench; weeping, nauseated, terrified of what this might mean.  We hoped, we prayed, that she’d quickly bounce back from this concussion, too.  It wasn’t to be.  What was ahead were two years of migraines, light and noise sensitivity, mood swings, difficulty sleeping and focusing at school.  Visit after visit to the neurologist ended with Supy being told to wait; no soccer yet.  She and I both left some of those appointments in tears.  She was watching her dreams evaporate.  I was watching my daughter lose hope.

I’ve watched Supriya lose her home country and her birth language,  boyfriends and best friends, but nothing seemed to hurt her as much as giving up soccer.  I worried that she wouldn’t bounce back this time; that finally something bad enough had happened to leave her lying on the turf, too injured to get up again.

I was wrong, of course.  She slowly found her bearings in a post-soccer world.  She took up piano, got her driver’s license, started working part time.  Her confidence returned, and with it her fantastic smile, her sense of humor, her boundless energy.  The little girl who could take a hit and turn it into a somersault on the field did the same with her life.

She graduated from high school this past weekend.  She was one of the tiniest girls in that swarm of caps and gowns.  We had trouble keeping track of her in the crowd after the ceremony:  she had so many people to talk to (she’s still never met a stranger).  She’s even recently started playing soccer in an adult league, the after effects of the concussion having finally subsided.  She asked Mr. Right and I for our permission and after reminding her of how serious it would be to get another concussion, we told her the decision was hers to make.  She scored in her first game and came home so full of joy over playing again that we knew we’d made the right decision.

Supy wants to be a social worker.  There’s no soccer scholarship for college, as we once hoped there would be, but she’ll find a way.  I’ve learned my lesson.  I won’t tell her that anything is too hard for her.  She’ll only prove me wrong again.